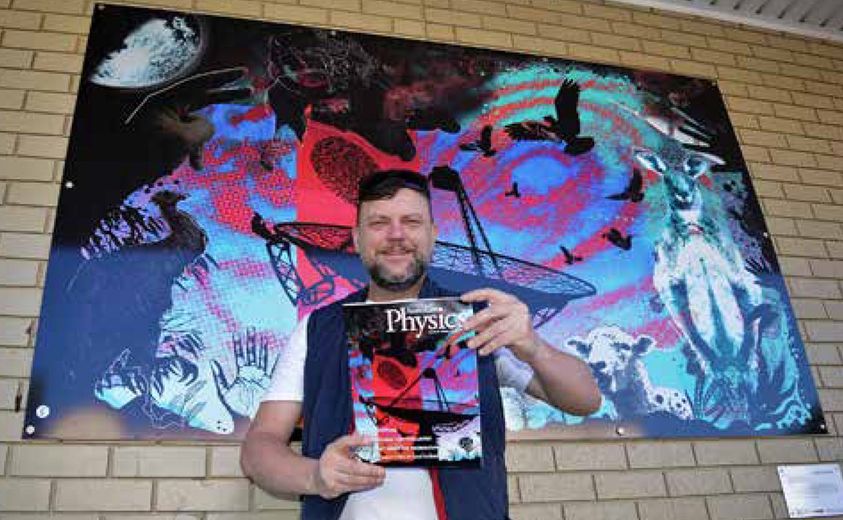 The Australian Physics magazine edition, which coincided with the heritage listing of the CSIRO’s Parkes Radio Telescope, used a section of a larger work of Parkes artist Sean James Cassidy.The work, Radio Telescope, is on permanent display on the Woolworths wall in the main street of Parkes.
Sean’s digital art work is based on a poem by his aunt, Kerrie Peden also from Parkes. The work depicts the importance of the harvest as the radio telescope sits in farming land. Native animals represent Goobang National Park to the east and hand prints signify the human spirit that has reached out and touched the moon.
The featured work is one of three based on poems by Sean’s father and Kerrie that are on permanent display and were installed for the 50th anniversary of the moon landing, in which the Parkes Radio Telescope played a vital role. The other two works are called Blood Moon and Millenia Wandering.
Image: Sean in front of the permanent display of his artwork in the Parkes main street with a copy of the Australian Physics magazine featuring the same art work in its most recent edition. Photo: Parkes Phoenix.
Tags: Parkes
Previous Post Sculpture Down The Lachlan funded to finish sculpture trail
Next Post Follow the signs to Portland