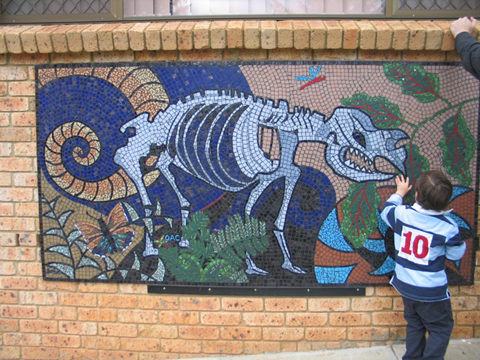 Oberon Arts Council president Fran Charge gives us the background story on a suite of community artworks that have become the pride of Oberon.

The Oberon Common is a special place for the town of Oberon, with its leafy trees, chain of ponds complete with some very friendly ducks, barbecue and picnic areas.

The area is made even more special due to the Public Art work projects undertaken by Oberon Arts Council to make the Common a place that represents the history and people of Oberon.

The Diprotodon Youth Mural Mosaic, was a project worked on by the young members of the Oberon community as a result of a Country Arts Support Program Grant to Oberon Arts Council. 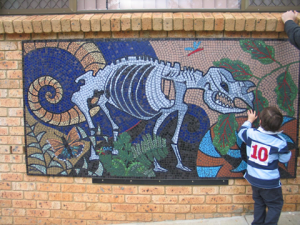 The mural represents the bones of the Diprotodon, (a prehistoric Wombat), which was found at Jenolan Caves. The mosaic of the diprotodon includes pre-history flora and fauna. The project was coordinated by Oberon Arts Council who engaged Artist and designer Selena Seifert.  The diprotodron was taken to all the schools and worked on by students of St Josephs and Oberon Public School who pieced together the glass mosaics. The mural was grouted in situ and is displayed on the wall of the Oberon Visitor Centre

One of the most impressive projects at the Common is the Terrazzo Tapestry.

The Terrazzo is based on the needlework tapestries designed by artist Kim Woods Rabbidge in 1988. The eight tapestries depicted various images representing Oberon, including landmarks and buildings, and were stitched by over 70 needleworkers in time for the Bicentennial celebrations. The tapestries are currently being cleaned before rehanging.

In 2008 Oberon Arts Council Inc, won a Regional Arts Fund Grant to recreate the 1988 tapestries designed by Kim Woods Rabbage, as terrazzo panels to be laid as beautiful terrazzo flooring for the rotunda at the Common.  Under the guidance of local artist Gabriella Hegyes, the eight panels were worked on by men, women and children in the Oberon community over seven weeks and now are a magnificent marble floor of the rotunda, depicting images such as Oberon’s farming landscape, pine forests, timber mill, Jenolan Caves and Oberon Dam. Oberon Council along with many community groups and businesses contributed towards the completion of the terrazzo, and now the rotunda is a favourite stopping spot for visitors with its impressive marble floor. The Terrazzo tapestries won the Programs, Projects and Partnerships section at the Local Government Cultural Awards in 2009

Oberon’s history is also ever present at the Oberon Common, with the addition of the beautiful Heritage Walls, which were opened in 2011. The Opening of the Artworks, was attended by hundreds of locals and visitors who came to see the finished artworks at the Common. 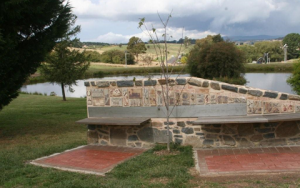 The Memory Walls, an initiative of Oberon Arts Council, were developed with artists Gabriella Hegyes, assisted by Oberon potter, Victoria Theyers. The striking shelter walls with seating, feature a timeline of embossed relief tiles depicting the history of the Oberon area, acknowledging Aboriginal heritage, pioneer families, Jenolan Caves, tourism and the farm and forest country. The shelter walls designed by Gabrielle Hegyes were built by Dennis and Rory Kirkwood of Glenrory Stone. Many locals and groups contributed towards the creation of the walls, from businesses donating labour and services to locals helping emboss the tiles during workshops.

Local families and localities are also remembered and recognized on the Family Heritage Pavers laid around the Walls. These pavers recognise pioneering families, localities, business houses, community groups, as well as recent settlers to the area.

In 2013 Oberon Arts Council Inc. was asked by Oberon Council to develop a public Art work on the new toilet block at the Common. This was to assist the youth of the town and help stamp out vandalism that was occurring in this area. 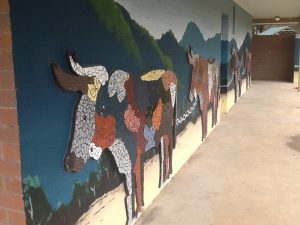 ‘The Look Out Bullocks About!’ Project commenced in 2013 under the direction of Selena Seifert. Local Schools worked on the mosaic bullocks which were taken to the schools St Joseph’s Catholic School, Oberon Public School, Oberon High School. The small schools of O’Connell, Black Springs, and Hampton completed the wheels for the bullock wagon. The bullocks and the wagon are now featured on the toilet block in front of a painted mural depicting an Oberon rural scene. This mural was painted by local sign writer Mark Taylor.

This Public Art Work was funded both by Oberon Council as part of their 150 Year Celebrations and Oberon Arts Council Inc. 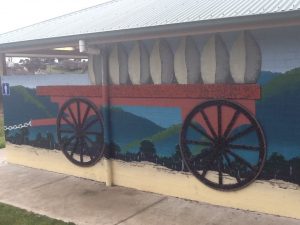 After the completion of this part of the ‘Look Out! Bullocks About! Project, Oberon Arts Council then employed Mark Taylor to reproduce the Oberon Timeline based on the timeline produced by Oberon Historian Alan Brown. This time line depicts the history of Oberon until 2015 when Oberon Council fought off Council Amalgamation with Bathurst.

Every Paver Tells A Story –An initiative of Oberon Arts Council Inc.

All Families who purchased a paver for the area around the Memory Walls were invited to include the story of their family in and around Oberon. There was such a great response to this it seemed right to collate these stories and so the 112 page book Every Paver Tells a Story was printed and quickly sold out. Copies to read are available at the Oberon Library and the Visitor Information Centre 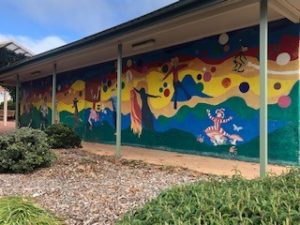 Inga lived in Oberon for several years before her premature death.

Oberon children were encouraged by Oberon Arts Council to participate in painting the scene whilst Inga was drawing.

Words and images by Fran Charge.