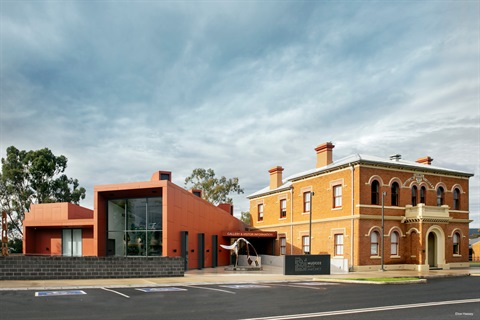 The Mudgee Arts Precinct has been named a finalist in the 2022 World Architecture Festival Awards.

Now in its fifteenth year, the World Architecture Festival (WAF) is the world’s largest festival and live awards competition dedicated to celebrating and sharing architectural excellence from across the globe. It is the only awards where designers pitch their work to a panel of expert judges and their peers.

“BKA is proud and delighted the intended design concepts have been achieved,” Director of BKA Architecture, John Baker said.

“The new building relates well to the heritage building allowing each to read from the public domain as an individual component”.

“The finished building is a brilliant fusion of old meets new, with a nod to the region’s important heritage. For its design to be considered against projects from all around the world is a huge honour for both BKA Architecture and the Mid-Western Region.”

The awards will be announced in Portugal at the end of the year.

Council co-contributed to the project after securing funding through the NSW Government’s Create NSW and the Australian Government’s Building Better Regions Fund.